Field of knowledge – 19 Architecture and Construction

Field of knowledge – 19 Architecture and Construction

News and events of the road construction faculty of KHNADU

Chair of Technology of road-building materials 06/18/2022

The building of the Road-Building Faculty, 3rd floor, 353 aud.

Broken-down roads and bridges are awaiting reconstruction. Will there be enough specialists ? 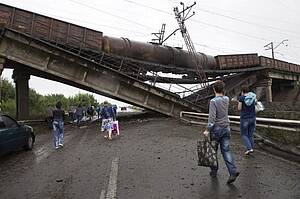 Since the beginning of the full-scale invasion ofUkraine by the Russian troops, our state has lost more than 15,000 km of roads, 5,000 km of railways, 15 airports, and more than 350 bridges. Such preliminary data were published by specialists of the Kyiv School of Economics (KSE).

As fierce fighting, bombings and missile attacks continue in many regions of Ukraine, the scope of the lost transport infrastructure is growing daily. In addition, the material and technical base of some road-building enterprises remains partially in the temporarily occupied territories: machinery, asphalt concrete plants, etc. Today, it is completely obvious that after the victory over the enemy, Ukraine will face huge amounts of reconstruction work, including those in the road sector.

The specialists of the Kharkiv National Automobile and Highway University (KhNAHU)are confident that the research and teaching staff of the Faculty of Road Construction will not only cope with the examination of each damaged or destroyed object, but will also be able to significantly increase the number of trainedengineers for the road construction branch.

“At present, we have not been able to accurately estimate the amount of losses and damage of the road network since the beginning of the invasion of Ukraine bythe Russian troops”, says the head of the KhNAHU Department of Road Construction and Operation named after O.K. BirulyaProfessor Valery Zhdaniuk. “It is clear that bridges and overpasses which are becoming targets for bombing and shellinghave been destroyed to the biggest extent”.

Of course, after the end of hostilities, the specialists of the KhNAHU Road Construction Faculty are ready to assess the condition of each such facility and develop recommendations for the restoration of its operational capabilities. However, it is already clear that major repairs will be needed not only for bridges, but also for many roads, where explosions have destroyed the roadbed (i.e. the "foundation" of the road) or damaged large sections of pavement.

We are prepared to start an examination of such sections and develop design solutions for their restoration by leading road construction companiesat any time. Separately it is necessary to pay attention tothe reconstruction of city roads under which various communications, pipelines, etc. are usually laid. Therefore, city roads should be reconstructed together with the municipalities: underground communications should be restored first with the following construction of pavement. Our specialists also own all the relevant technologies.

At the same time, the head of the Department of Bridges, Structures and Structural Mechanics named after V.O. Rossiysky Professor Serhiy Buhaievsky gives figures that characterize the amount of work on bridge structures in previous years and the need for their repair after the war. According to his estimates, in 2020 about 100 bridges were repaired throughout Ukraine, in 2021 – almost 150. And even then, there was a certain shortage of specialists in bridge construction. Today, at least 350 bridges need to be rebuilt, so the need for relevant specialists will increase significantly. In peacetime, 25 young specialists graduated annually from this department. But given the challenges of today, this year the number of students can be doubled and provided with training of really high quality.

Evidently, due to the increase in the amount of necessary road works, the need in specialists for a road industry also increases. Until now, the demand for graduates of the KhNAHU Road ConstructionFaculty at the domestic productionhas made up 100%. In the recent past, the road companies used to hire even undergraduate students, who could combine work with studies.

“I can say that there was a shortage of specialists with Bachelor’s or Master’s degrees even for the implementation of road works provided by the state program "Great Construction", says Volodymyr Maliar, Associate Professor,the Dean of the KhNAHU Road Construction Faculty. “Now we are awaiting a much larger amount of work, and hence – the number of relevant specialists should be increased.

Today KhNAHU has the teaching staff potential to increase the number of students in those specialties that are needed for the restoration of roads and bridges. These are the specialties "Construction and Civil Engineering" (for the trainingprogrammes "Roads and Airfields" and "Bridges and Transport Tunnels"), as well as "Geodesy and Land Management". In total, almost 650 students are currently being trained in these specialties at our faculty.

As for the new intake of students, we can increase the number of students (within the license volume) by 20–25%.

I think there will be enough applicants willing to study, because in the coming years the construction professions in Ukraine will become the most demanded by our society”.

In terms of numbers, the amount of damage caused to Ukraine's infrastructure by the Russian military invasion during the month of the war is estimated inabout 63 billion dollars. Two thirds of these losses are inflicted to the transport infrastructure of our country.